In November of last year I wrote about an unusually large earthquake (M 5.8) that had occurred close to Casey Station in Antarctica. Earthquakes of this magnitude are rare in East Antarctica, except, it seems, in the Casey region...

Indeed, on July 23rd of this year, another large earthquake (M 5.3) occurred in the same region. The following image is from the USGS and shows the position of this event as an orange star. 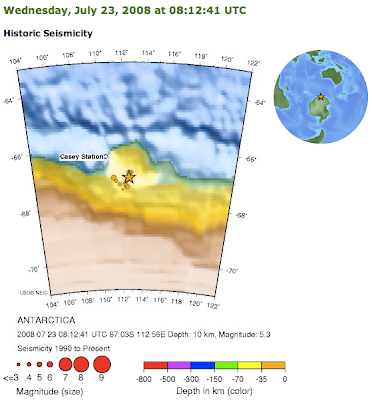 This event was recorded on seismometers all over Antarctica. As examples, I have plotted the recordings of vertical ground velocity for this earthquake at stations CASY (Casey), MAW (Mawson) and PSP02 (a POLENET temporary station near South Pole). 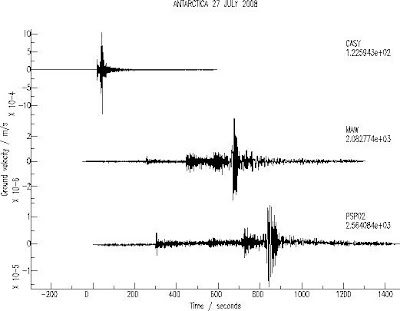 The numbers under the station names on the above plot are distances in km from the earthquake. As you can see, the earthquake was well recorded even at distances over 2000 km.

We often say that the Antarctic plateau is virtually a-seismic, meaning there are few if any earthquakes. As you can see for this Casey event, it would be hard to miss an earthquake larger than M5 virtually anywhere on the continent. Smaller events may still be missed, however, and we do not have enough seismic stations in Antarctica (yet) to be sure that they do not occur.