Summer vacation is over

With the end of July came the end of my much needed summer vacation. I took three weeks off last month in order to rest, recoup and recharge after this year's travels (7 weeks in Antarctica, and 4 weeks in the Sub-Antarctic islands).

I spent the time mostly sleeping, lazing on the beach, and swimming. This solar recharge should help me find the energy for the coming academic year: five research projects including the second year of CASE-IPY, teaching, and observatory work.

Here is a GoogleEarth image of my summer hiding spot: 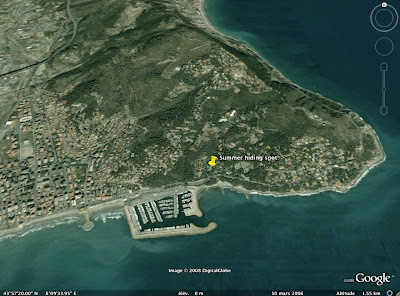 While I was still on vacation, Kim posted about a great initiative to federate and publish geological maps from all over the world. The initiative is called OneGeology, and a new version of its portal will officially be launched next week. The current portal is already very easy to use. The image below is a larger scale GoogleEarth image of my summer hiding spot, in which the geologic units from the BRGM 1:1.5M geological map of Europe have been imported from OneGeology. 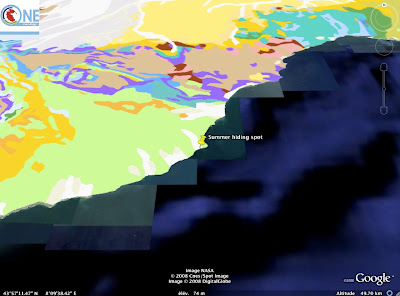 unfortunately, the portal is incompatible w/ the new FireFox 3 ... I hope they fix it soon, it looks awesome.

Hmm...I'm still using version 2... I guess sometimes it pays to be behind the times.

I hope they fix the Firefox compatibility problem for the new portal.

Here, I do not actually consider this will have success.