The 2007-2008 summer campaign is now over, and it is time to take stock, analyze the preliminary data from the CASE-IPY experiment, and start planning next year's campaign.

The objective of the 2007-2008 summer campaign was to complete and deploy three prototype autonomous seismic stations around Concordia. The three stations have been deployed at the following coordinates, from which they transmit part of the data they record to Concordia via radio link:

The preparation and installation of these stations would have been impossible without the logistical support provided by Concordia. The following people gave invaluable support to the project: Giuseppe De Rossi, Claire Le Calvez, Angelo Domesi, Shaun Deshommes, Fabio Piersigilli, Sandra Trifirò, Jean-François Vanacker.

You can find the available SOH (state of health) information for these three stations in this pdf file or in the following image. The symbols indicate the temperature and the input power voltage seen by the RefTek acquisition systems in each of the three stations. The horizontal axis represents time in days from January 1st.

All three stations seem to still be working one month after installation, although CAS03 seems to no longer be heated. Apparent data gaps in the first month are due to problems in the radio transmission rather than in the actual data acquisition.

Note: the SOH information will be updated regularly. Link to this post to keep up to date.

The sun is shining here in Strasbourg, and the temperature was a balmy -3°C at the time my plane landed. I will be taking the next few days off, and plan to be back in action again by sometime next week.

In the meantime, best wishes to all !

A cloudy morning in Hobart bay. We had been expecting summer conditions, but have found Tasmania in February to be pleasantly cool.

Yesterday upon arrival we were raring to set foot ashore and walk somewhere more than a few hundred meters away. Being stuck on a 65m vessel for five days tends to do that to you. We were also longing to get away from the ever present smell of exhaust fumes that have accompanied us day and night on the Astrolabe.

Our main stop was the botanical gardens of Hobart, which are well worth a visit. The colors, the smells, the feeling of grass underfoot... all things we had forgotten about after nearly 7 weeks in Antarctica, at sea or in airports. We spent a leisurely hour or so strolling in the gardens.

Today is Sunday, a day for a lazy stroll about the town, maybe visiting a few museums, or drinking coffee (or tea in my case) in a waterfront cafe.

Our departure is set for early tomorrow morning. I should be back home (and within reach of a computer) sometime on Tuesday.

The fourth and fifth days of navigation have been much more pleasant than the first three. Calm waters have made a big difference to my comfort level... I am no longer seasick, even without the patch.

Yesterday evening we celebrated our last night at sea with the traditional party. Lots of music, lots of dancing, lots of drinking. The ship is very quiet this morning. I suspect a number of people will not be feeling too perky when they wake up.

It is a grey day, and there is a mist on the horizon. The southern tip of Tasmania is barely visible, rising above the mist. We should reach it in six hours time. It will be great to set foot on dry land again!

We shall stay in Hobart for the weekend, sleeping on the Astrolabe, and shall start our 24h plane journey back to France on Monday morning.

The adventure is nearly over. I am very much looking forward to being back home, but at the same time I am sorry to leave Antarctica behind. There is a magic about the place I cannot quite explain...

This third day at sea has passed much like the two previous days. There is a moderate to strong sea-swell, which is making us roll severely (30 degrees either way). I'm doing OK at the moment, thanks to the sea-sickness patch.

There is not much to do on the Astrolabe to pass the time. One can read, watch films, work on a computer. I can do none of the above without feeling queasy. Other options are watching the sea from the bridge, or from the helipad at the rear of the ship. I spend most of my time either watching the sea from one of these two locations, or lying on my berth being rocked by the waves.

Eating on the Astrolabe requires willpower, and the certain knowledge that it is better to be queasy with something in the stomach than with nothing at all. Taking a shower is more challenging still!

We should have only another 48 hours at sea before we reach Hobart. Yay!

My state : patched, but still queasy and drowsy.

We are making good speed. At this rate we should arrive in Hobart Saturday afternoon. Fingers crossed!

After having managed to keep down none out of the three meals taken on board, I have now opted for a seasickness patch. Hopefully things will be better tomorrow.

We are expected to be on board the Astrolabe this afternoon, as our departure is set for early evening. Six days at sea await us... what a glorious prospect...

The day is bright and windy, which makes for great visibility, but choppy waters. The numerous icebergs that in the bay at the moment will escort us out to the open sea. I shall be sad to say goodbye to these ice-monsters.

Goodbye Dumont d'Urville, goodbye Antarctica! I hope to be back soon... 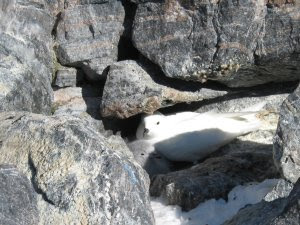 The sun is back, and with it the possibility to escape Dumont d'Urville base for a few hours. Today JY and I tagged along with two friendly ornithologists who had work to do on Lamarck island. We helped them count Adélie chicks, and put id tags on Snow Petrel and Cape Petrel chicks. The Snow Petrel nests are particularly difficult to find, as these birds hide in crevices in the rocks. We spent a very pleasant morning clambering over the island looking for them.

One thing I learned about Petrel chicks of both species is they projectile vomit in self-defense. Our friendly ornithologists got covered in the stuff, with one receiving a direct hit in the face... yum. My job was to help locate nests and write down the tag numbers. Even though I did not have to reach into the rocks to extract the chicks (I would not have known how to do so without hurting them) I still managed to get vomited upon.

Other notable events today: first sighting of Emperor Penguins in the archipelago and a partial solar eclipse.

The Astrolabe is back 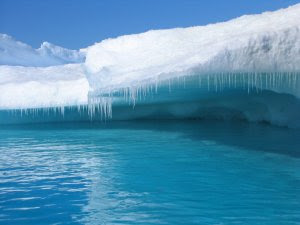 The sun that bathed us most generously over the weekend (the photo above was taken last Sunday) has given way to two days of wind and snow. There has been so much cloud that at times we could hardly see over to the next building, let alone make out the continent or the icebergs in the bay.

The Astrolabe arrived offshore early this morning, but did not dare come into dock in such windy conditions with near zero visibility. It waited until early afternoon for the snow storm to clear, then gingerly inched onto the bay and to its mooring. It should stay here five days or so, time enough to unload its cargo (mostly fuel for the winter) and pick up its forty odd passengers (I shall be one of them) for the crossing over to Hobart.

If all goes as planned, I should be leaving here this coming Sunday or Monday. Although the prospect of a 5-7 day crossing through rough seas the flat-bottomed Astrolabe doesn't really fill me with anticipatory joy, I shall be glad to be on my way home at last. 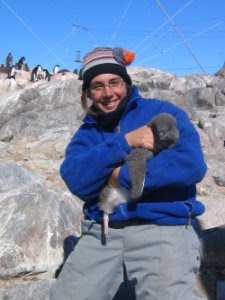 Petrel Island and Dumont d'Urville itself are home to a vast colony of Adélie penguins. They are everywhere, on every scrap of rock. They are cute little critters, once you get used to their smell and raucous calls. Many an hour can be whiled away by watching their comic antics, as they come and go from the sea, steal stones from each other's nests and feed their young.

The Dumont d'Urville colony has been under continuous study for a number of decades, and there is at least one marine ornithologist at the base at all times. Today, JY and I volunteered to help weigh some of the Adélie chicks born to the one hundred couples under study this year. Together with the resident ornithologist, we tracked down the correct chicks among the rocks, weighed them, measured the length of their right aileron, and removed their identification tags.

The chicks were all between 42 and 45 days old, weighed between 3 and 4 kilograms each, and had started to shed their downy fur for more sea-worthy feathers. They will soon complete their transformation and take to the sea for the winter. The chick I am carrying in the photo was, at 2.75 kg, the smallest one we weighed today, and still had all of its down. It was very placid and soft to the touch: a pleasure to hold 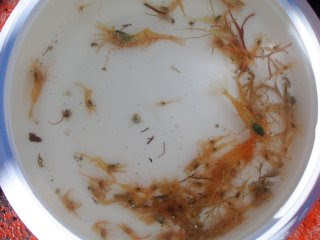 Another beautiful day on Petrel Island, and another fishing trip, far more successful than the last one I described. Part of this morning's catch is shown in the photo above.

The spot we went to was the same as the one we visited two days ago, but the ice scenery was entirely different. In two days most of the bergs had drifted to new positions. Some of the larger tabular ones had lost parts of themselves through calving, and one of them had flipped on its side. We just missed seeing a large chunk calve off a tabular berg. We heard it though, and saw the resulting wave and ice-debris: impressive! 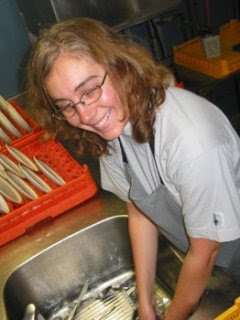 One of the pleasures of living the Dumont d'Urville life is being on cleanup detail every now and again. This detail includes laying the tables, serving, clearing and washing up after three meals, as well as cleaning all communal living areas. Three people are assigned to this detail every day, with one of the three on lighter "backup" duty.

I was "backup" in today's cleanup detail. In order to avoid what I consider to be the worst aspects of the job (floor and toilet duty) I volunteered from the start to do all the washing up. I had already had some experience at washing up efficiently for this number of people atConcordia, where I was on "dishes detail" twice in two weeks (the second time was the day I left - the last thing I did at Concordia was wash dishes...).

For my family and others who know me well and may have trouble believing I could wash up three times a day for sixty people, the photo above should serve as proof...