A data logger with a problem 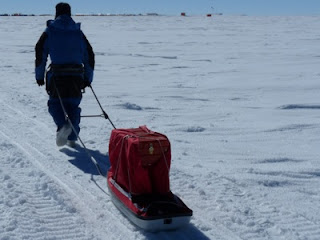 You may recall from my descriptions of the seismic observatory at Concordia in last year's blog posts, that we have two seismometers down there, each connected to a different data logger. Both have worked reasonably well over the course of 2008, considering the conditions they run in (those of you who have kept up to date with http://case.u-strasbg.fr know this already).

However, on December 10th, for no apparent reason, one of the data loggers (a Q4120) stopped working. We have been trying to deal with the problem remotely (i.e. sitting warmly in our lab at the base, and working over a wireless connection to the seismology shelter that is 1km away) since we got here on the 18th, but have had little success. Last Saturday, the machine decided it no longer wanted to talk to us over the network, so we strolled over to the shelter (err... trudged would be more appropriate in my case, I'm not yet fully acclimatized to the altitude) to try to fix the problem. To no avail.

It was obvious that we would not be able to fix the recording system at the shelter, and that it needed to be brought back to the lab. However, carrying it over that distance by hand was not a viable proposition, so we simply prepared it for transport and left it there, knowing we would have to come back with some transport system to pick it up.

The route to the seismic shelter goes past several other scientific shelters, including one in which the air is continually filtered and its composition measured. Because of this particular experiment, we are not permitted to take a vehicle along the route, and so (in all but exceptional circumstances) have to carry equipment to and from our shelter on foot, either in backpacks or on sledges.

We went back to the shelter this morning, in order to pick up the faulty data logger. The photo above was taken this morning, and shows the Q4120 being pulled along by a volunteer Sherpa, a glaciologist by the name of Bruno who is much better acclimatized than either my colleague Maxime or myself. The data logger is now sitting on a table our the lab at the base, with all its innards visible, and cables strung across the room to various other bits of equipment. We have made some small progress to getting it working again, thanks mainly to valuable suggestions from our colleagues in Europe and the the manufacturer himself, but we're not finished yet!


PS: I must still have been over-tired when writing yesterday's post. Of course the picture in that post is not of Mount Ross (which is on Kerguelen Island in the sub-Antarctic) but of Mount Erebus, on Ross Island in Antarctica.