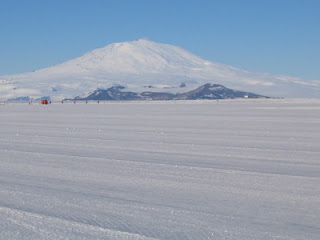 Days of the week swiftly loose their meaning when you are cut off from the rest of the world. Just as we try to keep a normal 24 hour daily schedule, we also try to keep a normal weekly schedule. Sundays are set up to be a day of rest: breakfast is from 8 to 10 am instead of from 7 to 8 am on weekdays, the evening meal is a buffet of the previous week's left-overs to give the cooks a half-day off duty.

It is very hard to stop working during a summer campaign, as there is a great deal to do in the limited time we have up here. It is common for most people to work 7 days a week, with the only change being a slightly later start on Sundays. Although this rhythm cannot be sustained eternally, most of us try to keep it up for the 4 to 6 weeks of our campaigns.

However, if you add to this situation fatigue caused by insufficient adaptation to altitude, by sickness, or simply by lack of sleep, then you can end up in trouble, as I found out to my expense this morning.

After lying awake from 2 to 5 AM unable to get back to sleep, I thought I would get up and start my day. I've not had a decent night's sleep since arriving here. This morning, instead of doing something harmless - like doing some TaiChi or Yoga, or simply browsing the comic book collection in the common room - I decided that I should get started on some of the work that had been buzzing around my brain all those hours.

Well, the obvious happened, and I messed up. I was overly confident in my abilities, did not take enough care to check all the premises of the line of thought I was pursuing, and eventually made a big mistake. It was not an extremely serious mistake, and it was corrected easily enough later in the day, but it did lead to the loss of about 10 hours of secondary data from the only working seismometer at the CCD observatory. Not the end of the world, granted, but I should have known better!

Lesson to be learned: lack of oxygen, lack of sleep and excess confidence are a disastrous combination! I shall have to work hard on the third element in the next few days, at least until I develop a regular and restorative sleeping pattern.

PS: The image is of Mount Ross, taken from the airport at McMurdo.