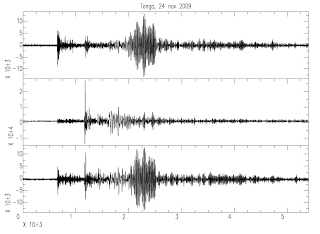 It has taken a while to get my head around the data we brought back from the three prototype CASZE-IPY stations, including the time we took off to celebrate Christmas, but I now have some preliminary results regarding data quality: it is excellent!!

The picture shows an earthquake that occurred last November 24th, in the Tonga region, recorded on the CAS03 station. CAS03 did not suffer from the field error that resulted in stopping the acquisition of data from the two other stations. It continued to record until June 3rd, a full month into the Antarctic winter. As soon as the sun showed itself above the horizon (August 16th) it started to come alive again, but did not have enough power to stay awake more than the few minutes of direct sunlight. Its first day of continuous recording after the winter was September 10th.

We are very happy with this result! In all, we recorded 42 separate earthquakes of magnitude 6.3 and above on the CASE stations last year. Not all recordings are of this quality, but all in all, I'm pretty satisfied with the result. Another source of satisfaction is that none of the GPS units failed this year, and the timestamps are accurate. This validates our choice of installing the GPS units directly inside the boxes housing the acquisition systems, and confirms that there is indeed enough signal quality through a wooden box cover and 20 cm of snow to get an accurate time.

Work is continuing on the CASE-IPY stations for this year's deployment. We plan to have everything completely tested by Wednesday. On Thursday, the big strong guys of the seismo team, together with several volunteers, will go back to the site of CAS02 to dig out the cable we were forced to leave there last time.

We still have no confirmed date for our five deployment flights in the direction of Vostok, but plan to be fully good to go by the end of next weekend...