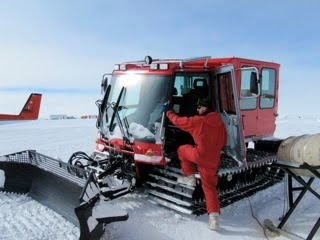 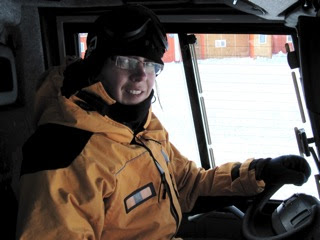 High on the priority list of things to do for the CASE-IPY experiment is to recover the data from the second year of deployment of the CAS01, CAS02, CAS03 prototype stations. These stations are at 5 km from Concordia, and can be reached using a vehicle with caterpillar treads.

This year, the base has a new vehicle, the oddly named "Bully" or "PB100", shown in the photo below.

Excellent ! You look like real pilote ! If you're unemplyed at the end of the season, you'll work in the ski Resort !! ;-)

That's cool! When you have your driving lessons with that big car though. lolz. But that's nice though to learn to drive that. Thanks for sharing the pictures.

That's very cool, I'd love to have the chance to drive Bully. It's a very impressive piece of machinery, I particularly like the caterpillar treads. When I was a child I had a toy that was pretty similar, which I played with all the time.