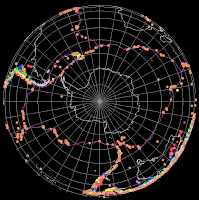 If you're thinking: "Earthquakes in Antarctica? I did not think there were any!" you'd not be far wrong.

Although there are a few seismic events in Antarctica, these are generally small in magnitude, and often remain undetected by the global seismic network. Indeed, one of the objectives of running seismic experiments in Antarctica during the International Polar Year is to detect more of these earthquakes.

Although Antarctica is not itself particularly seismically active, it is, however, completely surrounded by earthquakes.

You may already have heard of the "ring of fire", that surrounds the Pacific ocean. It is made up of subduction zones that are capable of producing very large earthquakes. Antarctica has its own, much weaker ring of earthquakes, as you can see in the seismicity map that accompanies this post. These earthquakes are produced by a network of mid-ocean ridges that completely surround the continent, and that can generate moderate to large earthquakes.

For a seismologist, being surrounded by earthquakes is a great advantage. Each earthquake acts as a light bulb, illuminating the Earth, and enabling us to study its structure. Improving our knowledge of Earth structure is one of the main objectives of our seismology experiment (see Concordia Antarctic Seismic Experiment). I'll be developing this idea further in future posts.