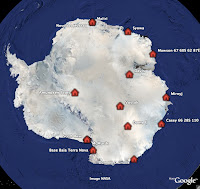 There are more research stations in Antarctica than you might think (and many more in the western part of the continent compared to the eastern part). It is surprisingly hard to get a complete and accurate list.

I've made a map, and a list of permanent East Antarctic research stations with links towards websites concerning them. For the click-lazy, I've put in italics some information from each website.

Casey (AUS) - Casey is located in the Windmill Islands - just outside the Antarctic Circle - and is the third Australian station to occupy a site on Vincennes Bay.

Concordia (FRA + ITA) - The French (IPEV) and Italian (PNRA) Antarctic programmes have agreed to cooperate in developing a research programme that includes the construction and operation of a scientific base located at Dome C, high on the Antarctic plateau. Concordia Station has been opened since 2005 to the worldwide scientific community for conducting scientific research.

Davis (AUS) - Davis is the most southerly Australian Antarctic station and is situated 2,250 nautical miles south-south-west of Perth, at 68 ° 35' South, 77 ° 58' East, on the Ingrid Christensen Coast of Princess Elizabeth Land.

Maitri (IND) - In the year 1988-89 India built its second indigenous station Maitri at Schirmacher oasis, which is well equipped and facilitated to accommodate scientists, round the year and allow them to conduct their scientific experiments.

Mawson (AUS) - Mawson is situated on an isolated outcrop of rock on the coast in Mac.Robertson Land, at the edge of the Antarctic plateau at 67'36'S 6252'E. It is Australia's first continental station and the longest continuously operating station south of the Antarctic Circle.

Mirny (RUS) - Mirny Observatory (opened on February 13, 1956) is situated on the coast of Cape Davis at a small protrusion of Mirny Peninsula at a point with coordinates of 66033’S and 93001’E. The altitude of the station above sea level comprises 35 m. The shore in the vicinity of the station is called Pravda shore.

Novolazarevskaya (RUS) - The Novolazarevskaya station is located at the extreme southeastern tip of the Schirmacher Oasis approximately in 80 km from the Lazarev Sea coast. An ice shelf with a slightly undulating surface resting against an ice cap extends north of the station in the vicinity of Leningradsky Bay. From the south, there is a continental ice sheet slope.

Princess Elisabeth (BEL) - In 2007-2008, Belgium will construct a new research station in Antarctica. This station will replace the former Belgian Roi Baudouin base, built in 1958 at Breid Bay in Dronning Maud Land, closed in 1967.

Scott Base (NZ) - Scott Base was constructed for New Zealand's participation in the Trans-Antarctic Expedition and International Geophysical Year and was officially opened on 20 January 1957. Although designed for a life of only a few years, the value of Antarctic research was soon recognised and a base re-building programme began in 1976.

For the latest updates to the full research station list, try consulting Wikipedia. Help me keep this post up to date by commenting on any mistakes or omissions you might find.

A great article indeed and a very detailed, realistic and superb analysis of the current and past scenarios. I would like to thank the author of this article for contributing such a lovely and mind-opening article.

It’s a great post Man, you really are a good writer! I’m so glad someone like you have the time, efforts and dedication writing, for this kind of article… Helpful, Useful, and Charitable.. Very nice post!