Concordia is not only a great site for Astronomy (see Concordia Science #1 - AstroConcordia), it is also an active site for Glaciology.

EPICA is the European Project for Ice Coring in Antarctica. Ice cores are used to obtain full documentation of the climatic and atmospheric record. This European funded project involved drilling and analyzing two ice cores and comparing these with their Greenland counterparts. One of the two sites chosen in Antarctica is Dome C, where the Concordia base is located. The other site is Kohnen Station, in Dronning Maud Land.

The Concordia ice-core, which was completed in December 2004, reached a depth of 3270.2 m, 5 m above bedrock and extended the record of climate variability to an age estimated to be around 890 000 years old. The ice-core results are being completed by studies on glacier flow, down-hole temperature and surface snow properties to refine climatic interpretations.

In a previous post I wrote about the sub-glacial lake under the Vostok station. There are many such lakes in Antarctica, a number of which are in the Dome C area near Concordia. 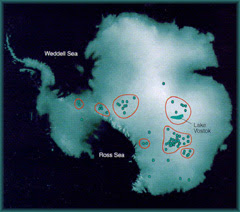