M8.0 Near the Coast of Central Peru.

At the time of this writing, the earthquake is known to have claimed some 330 lives, and have injured over 1300 people. You can read more up-to-date news agency reports about this earthquake: Reuters, BBC, CNN.


Here is the USGS ShakeMap for this event. It shows the intensity of shaking induced by the earthquake. It reaches very strong / severe level near the fault plane (which is shown by a black rectangle).

This earthquake occurred in a region known for its large magnitude events. The tectonic information that follows comes directly from the USGS web-page on this event.

The largest earthquake along the coast of Peru is the magnitude 9 that occurred in 1868. The 1868 earthquake produced a tsunami that killed several thousand people along the South American coast and also caused damage in Hawaii.

For those of you who like to look at seismograms, here are some of the records for this event taken from Rapid Earthquake View. 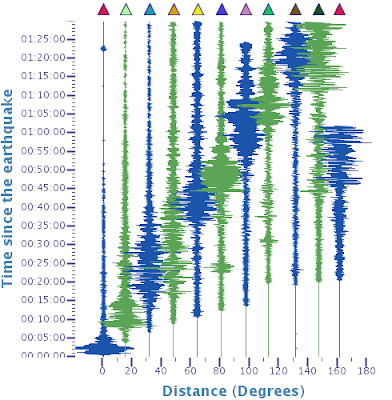