As promised in this post a while back, here is a short post about the M5.2 event that occurred on the island of Kerguelen at the end of July.

Kerguelen is a volcanic island in the Southern Pacific ocean. Its "known" seismicity is very low. However, as it is in a region with very few seismic stations, "low seismicity" may also mean low-level seismicity that is too small to be recorded on a sensible number of stations.

The M5.2 Kerguelen Island event was recorded on many seismographs of the global network, and is therefore reasonably well located. One of the stations that recorded the event is PAF (Port aux Francais) which is located on Kerguelen itself.

The PAF station also located several aftershocks. You can see the records for these aftershocks in the following images. The seismograms show vertical component of motion, high-pass filtered at 2 seconds.

The first figure shows the main-shock record in red, followed by the aftershocks recorded on the first day in black. 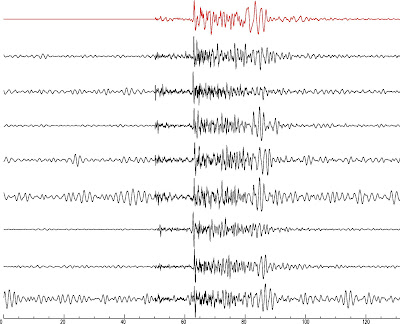 The second shows the main-shock again, followed by the aftershocks recorded on days 2 to 10 after the event. 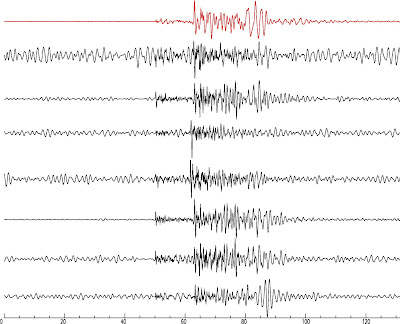 Note how similar the aftershocks are to each other and to the main-shock.