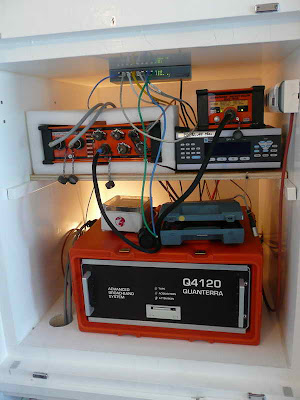 After last week's post on the RefTek digitizer that we shall use extensively for the CASE-IPY experiment, here is a short post on the digital acquisition systems used by the permanent station at Concordia (CCD).

They are two very different generations of machines, the Q330HR is newer than the Q4120, but their purpose is the same:

The quality of a digitizer contributes greatly to the overall quality of a seismic station. These two are some of the best in their class.

We shall have work to do on both of these digitizers, to configure them to talk to the SeisComP system that is supposed to make it easier to retrieve and archive the data they record. We have prepared for this by setting up identical systems here in our lab in Strasbourg and going through the entire configuration procedure from A to Z. We suspect, though, that going through the procedure at Concordia will be a bit more difficult given both the cold and the lower oxygen level up there!