There has been a lot of buzz around the web recently about new high resolution imagery of Antarctica, called Landsat Image Mosaic of Antarctica (LIMA). LIMA was created by the U.S. Geological Survey (USGS), the British Antarctic Survey (BAS), and NASA, with funding from the National Science Foundation (NSF). Follow the links to read the official press releases from the USGS, BAS, and NASA.

As an example of the quality of images available from LIMA, here is a false-color map of the region surrounding the French permanent Antarctic station Dumont d'Urville. The false-color map incorporates infrared data, which makes it easier to distinguish between ice and snow. Each pixel in the image represents a 15x15m area. 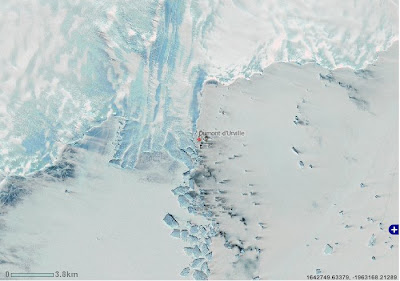 In this image, South is approximately up. You can see the difference between the glaciers sitting behind Dumont d'Urville, and the sea-ice sitting in front of it. In winter the sea-ice completely shuts off the base from the water. As there is no airfield, just a small landing area for Twin Otters and helicopters, all cargo and most people must get to and from the base by ship. The base is accessible only during the summer months, when the sea-ice retreats.

I have been told that the first trips of the year, usually end of October, are the most spectacular. The Astrolabe (the ice-capable ship used to reach Dumont from Hobart in Australia) has to navigate between plates of sea-ice, and some years cannot get to the base itself. In these cases, if the ice-pack is not too wide, people and light cargo is ferried over to Dumont by helicopter. Sometimes the ice-pack is too wide, and the ship has to turn around and go back.

The crossing my colleague JY and I are booked on is due to sail from Hobart on December 28th. We will most likely reach Dumont on the 1st or 2nd of January, at the height of the Antarctic summer. Our chances of finding sea-ice are minimal, but we may if we are lucky get good views of the larger icebergs that will not have drifted too far or melted too much by that time. I am very much looking forward to that!

The first private eye hospital of the city.As we moved step by step, staying abreast with the latest technology of the field,
we marked our presence and our foot print for others to follow. Today we stand in our realm with a crown on our head, cherishing
every accomplishment with a pride and with humility for we owe it to our patients. Patients that entrusted their confidence upon us
and by the grace of Allah SWT still continues.for futher information just visit us