Where is the Astrolabe?

The Astrolabe, the ship in the image on the left and our transport to Antarctica, is currently at Dumont d'Urville. You can follow its progress on this web page, or using Google Earth and this kml file.

A little while ago, I wrote a post about the new high-resolution images of Antarctica, called LIMA. They have now been integrated into Google Earth. Here is an image of the current position of the Astrolabe superposed on the LIMA image, in which the ship seems to be navigating on sea-ice. The ship's position is given by its on-board GPS, and is updated regularly. On the other hand, the background image is fixed, and shows the winter extent of the sea-ice. In the height of the Antarctic summer (the summer solstice is two days away), the waters around Dumont d'Urville are usually navigable, though dotted with ice. 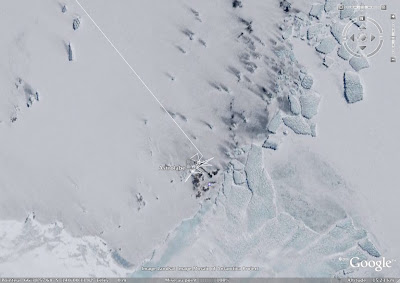 As soon as it has finished unloading its cargo, the Astrolabe will go back to Hobart, from where it is scheduled to depart again - with me on board - on December 28th. During the next week, I'll be keeping a close watch on its position !