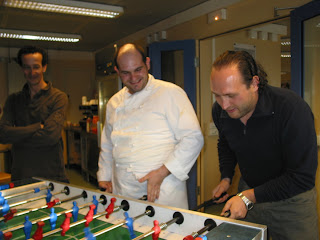 Either way, you are bound to be satisfied at Concordia. The living room becomes the scene of two mini-tournaments every day, one after lunch and the other after dinner.

The quality of play is excellent! Italian and French players have very different playing styles and rules. Italians tend to shoot hard and from the far end of the court, while the French tend to dribble the ball and shoot from close to the goal. Here at Concordia the rules are dropped and the styles are mixed, giving rise to quite spectacular play.

I had never thought such a game would make a good spectator sport, but it sure does. The running commentary from both players and spectators is also great fun, especially if you can understand both the more colorful varieties of both French and Italian... It sure beats television (which we don't have) as a way of relaxing after a meal.

In case you were wondering, my own exploits at this game are abysmal. The only thing I can say in my defense - having lost both games I have played - is that I have never lost 10-0...