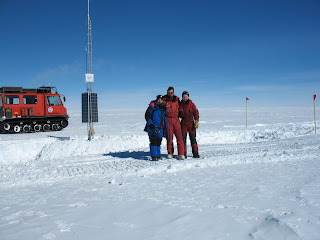 It has taken us a lot of time and effort, but the first CASE-IPY station is finally installed. The photo above shows a snapshot of the station as we left it yesterday, and a subset of the installation team (from left to right: myself, Angelo and Claire - JY took the photo).

The seismometer is half a meter down, in between the two flagpoles at the right of the photo. You can see the the mast with the white radio antenna and black solar panels. You can no longer see the two large boxes either side of the mast, holding respectively the acquisition system and the batteries, because they are covered by snow. (If there is one thing that can be said about doing seismology in Antarctica, is that it involves a lot of shoveling snow!)

The funny looking vehicle on the left of the photo is the Flexmobile, with which the 5km journey to the station takes a little over half an hour. I was surprised how un-flat a snow plateau can be. The snow is hard in places and soft in others, making for a very bumpy ride, even in on caterpillar tracks.

Now the first station is installed, the others will follow quickly. The next two stations are scheduled for tomorrow and the day after. That will leave us with three days during which to monitor the stations before we fly back to Dumont d'Urville (our flight is on January 26th).

Time is short, but we are making the most of it...