Seismology in the freezer 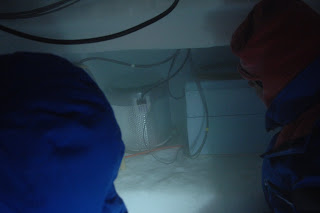 The Concordia seismic station (CCD) has been having a few difficulties lately, which is not surprising given the temperature in the seismic vault is a stable and hideously low -59C. No electro-mechanical system likes working at that kind of temperature, and neither do I.

We have two identical seismometers in the vault. One is heated to a balmy -35C, the other is left cold. A few days ago the heating system stopped working. This sent the "warm" seismometer into a severe drift that drove one of its internal masses to the end of its range. What had been a highly sensitive seismometer was now only a heap of junk metal.

Today, JY and I went down into the seismic vault to localize and fix the problem. The vault is accessed from a shelter (a cabin) a short 1km stroll from Concordia base. At least it is a short stroll in good conditions... in the kind of conditions we had today (28 knot winds blowing snowdrifts everywhere, and a temperature of -30 before wind chill) it was a grueling slog.

Once at the shelter, one opens a trapdoor that leads down to a 45m horizontal snow tunnel. At the end of the tunnel is a short metal ladder, that leads to a longer metal ladder that takes one down to the vault itself. It is bitterly cold beyond the trapdoor, and it only gets worse the deeper into the vault one goes. The air is soon filled with mist from our breath, so visibility quickly becomes poor.

But it's over now. The seismometer is working correctly again, and our trip to the vault the stuff of memories. I shall be glad not to have to repeat the operation any time soon!

The photo above shows JY and me just after we opened the cabinet containing the seismometers. It was taken by a CNRS photographer who accompanied us into the vault on an earlier trip this morning to find the cause of the problems. The two instruments are covered by insulation. The "warm" seismometer is on the right.