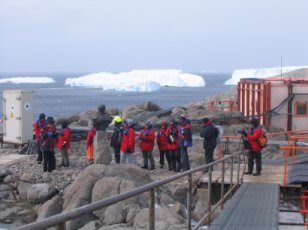 Dumont d'Urville - referred to as "Dumont", "Durville" or "DDU" for short - is a relatively old scientific base. It is perched atop rocky Petrel Island, just off the Antarctic continent, and is home to resident colonies of Snow Petrels and Adélie penguins as well as to a few dozen scientists and logistics personnel.

It is made up of a few weather-worn, reddish, prefabricated buildings connected by metal walkways. We have dormitories, various science labs, a central living/dining building, a post-office, a meteorological station, a power station, and a couple of sculptures, one of which is of Mr Dumont d'Urville himself.

The sky is grey overhead today, the wind has picked up, and there is a little snow. The cold is nowhere near as intense as it was at Dome C, but it feels colder due the higher humidity level at sea-level. Since coming down here from Concordia I have been frustrated... there was so much to be done up there, and so little to be usefully done here. It feels like I'm on a forced vacation... Ugh!

Personally, Dumont d'Urville is not a place I would choose to go on holiday. When I need to relax, chill out, indulge my desire to do nothing at all, I tend to choose warmer, sunnier spots than this. I was surprised to discover upon arriving here that Dumont is in fact a tourist destination. This week alone, two tourist ships have dropped in for a visit, sending their passengers ashore for a quick tour of the base. Today's ship carries 100 tourists from New-Zealand. They come ashore in small groups, and are shown around by the resident scientists (see photo above). They are shown some of the labs, the living area (where they are offered a hot drink and biscuits), the Post Office (for post-cards and special Antarctic stamps that are much sought after by collectors), and the office of the "Chef de District" where they can purchase other souvenirs.

Antarctic tourism is a booming business, as many of the more accessible bases in the Antarctic peninsula can attest too. Tourists pay a great deal of money to set foot on the continent, take photographs of penguins, talk to us campaigners. Although it rankles to see a scientific base invaded in this manner, I cannot be annoyed at the tourists themselves. The fascination of living an "Antarctic experience" can be extremely powerful. This fascination was part of the reason I jumped at the opportunity of working here in the fiirst place, and undoubtedly motivated the fiirst steps of many campaigners and winterers before me. There is, however, something deeply displeasing about the concept of tour operators making money out of the vision, tenacity and hard work of many generations of scientists and dedicated Antarctic support personnel.

P.S. I apologise for the low resolution of the photos on my posts from Dumont d'Urville. I am limited by a very severe quota on email attachments (30kb), and cannot send posts other than via an email-to-blog system.

The benefits derived from responsible tourism, such as better knowledge and appreciation of the region are substantial. The wildlife-rich coastline, snow-covered mountains, glaciated landscapes, and extreme weather of this physically remote and magical part of the world lend this region remarkable wilderness and aesthetic value for the adventurous traveler.

This is a very interesting blog and so i like to visit your blog again and again. Keep it up.