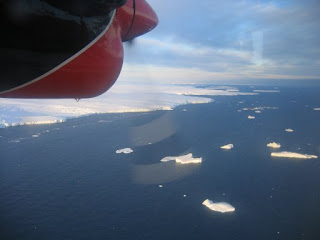 The Concordia chapter of this Antarctic adventure is now over, and we are back in the more moderate climate of coastal Antarctica. The photo above was taken at around 4am local time, as we came in to land at D10, the landing strip on the plateau that serves as the Dumont d'Urville airport.

Leaving Concordia was hard for me to do. There was a strong community spirit which I shall miss. Life was by no means easy up there, between the cold, the altitude and the spartan living/working conditions, but these difficulties created strong ties between us all. At Concordia it is natural to help each other out whenever possible, as you never know when you'll need help yourself. Of course, some people are more generous with their time and energy than others, but for the most part you barely need ask to receive the help you need.

Our continuously advancing departure date, and the ensuing rush to get everthing finished on time, made it hard for me to savour the last couple of days up there. We were being pushed out of the door, forcibly ejected not by the people at the base themselves, but by logistical necessities that were beyond our control. Intangibles such as community sprit and friendships grown out of shared hardships could be given but little consideration.

All too soon we were climbing into the Twin Otter for our flight back, having barely had time for rushed goodbyes to the thirteen winterers and the few remaining summer campaigners. A chapter was closing, too fast and suddenly for my liking. I do not believe I was the only one who got a little emotional as the plane taxied off...

The flight to the coast lasted five hours, during which it was hard to sleep (Twin Otters are not the most comfortable or quiet of aircraft). We saw the moon again for the first time in weeks. Indeed we saw it for most of the journey, as our route from Concordia to Dumont d'Urville lay almost due North. The coastline itself was beautiful in the soft early morning light, albeit with much less ice and many fewer bergs than when we had set out two weeks ago.

The ice will return as winter sets in, though I shall no longer be here to see it. JY and I are due to leave on the next rotation of the Astrolabe, in approximatelly two weeks' time. Until then our new base will be Dumont d'Urville, with its coastline, its icebergs, and its colony of (noisy and smelly) resident Adélie penguins.