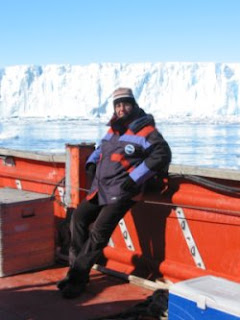 Sunshine makes a world of difference! Today we finally had blue skies again, after nearly a week of cloud, wind and snow, so we celebrated by going on what was supposed to be a photo-tour. The first stop on our tour was the quay, from which we had planned to start circum-walking the island, keeping as close to the water and sea-ice as possible, so as to get good pictures of penguins, seals and aesthetically pleasing ice formations.

Instead we found a group of "ornithologists" preparing for a fishing expedition (actually marine biologists, not bird experts, but any life-scientist seems to be called an ornithologist here). They promptly invited us to join them. After dropping a cage for catching crustaceans in the open waters of the bay, we navigated to a quiet spot sheltered by icebergs, and started dredging the bottom of the bay for whatever happened to live there.

We managed three runs before the hydraulics powering the winch broke down, and we were forced to raise the last dredge-pan by hand. While the marine scientists and JY had fun poking around in buckets filled with odd, spindly, spiky, gooey marine creatures (not really my kind of thing), I spent time taking in the spectacle of icebergs at close quarters.

They are a magnificent sight, glistening in the sunlight, changing color and shape depending on which angle you view them from. Some have had caves excavated in them by waves, others have been sculpted into soft shapes by wind and water. Yet others are tabular, and in the right light you can see they are stratified like sedimentary rocks (the "sedimentation" is actually snow accumulation) and traversed by fault-lines and crevasses.

It was cold on the water despite the sunshine. We had not expected to be taken fishing and had not dressed accordingly... However, the opportunity to spend time close to those fascinating ice-monsters was well worth it!