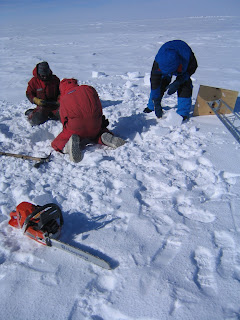 Today we got our first real taste of the cold. So far we have been enjoying moderate summer temperatures of -30C, with little or no wind.

I was surprised at how comfortable such temperatures can be so long as one is sensibly covered up and there is no wind. This morning wind picked up, and though the temperature itself was still only in the low -30s, the wind chill made it seem more like -45C. We found that so long as one keeps moving and doing some form of physical activity, even this is not too bad.

One of the bits of work we had planned for today was learning how to install the 7m masts we will use for our radio transmission, GPS reception and to hang our solar panels on. Step one was making a hole in the snow, which involved considerable physical activity. Shovels? Yes, but for the most part we used a chainsaw and a pickax (see photograph - I am not in it, I was the one taking the picture). The idea is simple: use the chainsaw to cut the snow into blocks, use the pickax to loosen them, and the shovels (and one's hands) to get the blocks out of the hole. The method seems rather barbaric, but it works well, is very fast and is a lot of fun. Beats making snowmen any day!